Postcard
A CMYK Halftone postcard showing a yellow trolley at center, on the tracks beside of the Trolley Café. The yellow trolley is at center and is being driven by a conductor that has been identified as Rabbi David Steinberg. He is standing in the center window of the #952 trolley which has been painted yellow with red accents. The marquis’ above the windows reads (L to R) “Car House”, “Canal”, & “99”. The window frames are also red. A painted sign in the bottom left panel of the trolley front reads “America’s Only | 5¢ | Trolley Ride”. The trolley is parked in between a passenger car and a beige and white striped awning of the Trolley Café. There are two men and two women seated on the covered patio at white wrought iron tables on a fake grass matting. The rear of the postcard at top left reads “Chattanooga Choo-Choo | Chattanooga, Tennessee | Hop abourd for America’s only 5¢ trolley ride – and stop off a the Trolley Cafe for a midday snack or a late evening Irish Coffee. Enjoy the trolley ride through formal gardens and past the Chattanooga Choo-Choo’s steam locomotive. | Photo by Bruce Miley” At the bottom, center the photograph is labeled as a “Plastichrome® | ©Colourpicture | Boston, Mass. 02130” There were two nearly identical trolleys as a part of the Chattanooga Choo Choo complex, Research online lists that one of the trolleys was originally built in 1924 by Pearly Thomas Car Works of High Point, NC for use in New Orleans until 1960. The trolley was then purchased by the Tennessee Valley Railroad Museum for restoration and was put into service in 1973 when the Chattanooga Choo Choo complex opened. Unfortunately, the trolley’s were virtually identical and the numbers (952 & 953) were switched out when it was repainted. 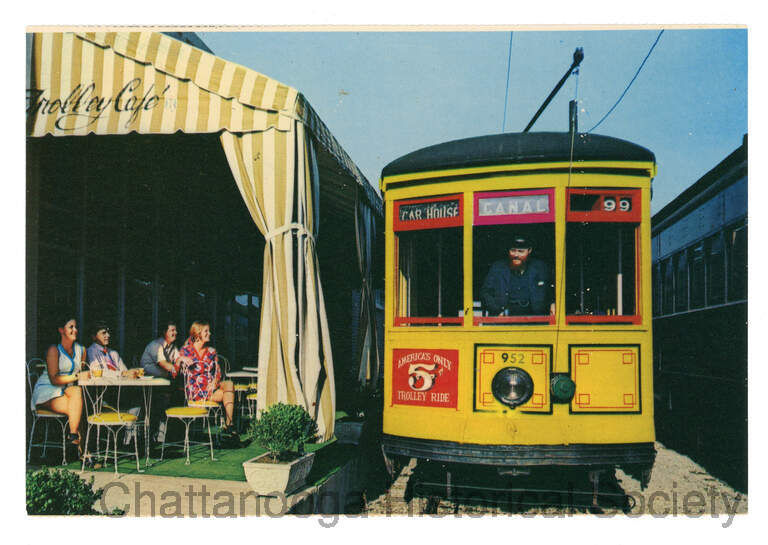