Photograph
One of the Chattanooga area’s most interesting citizens was “Uncle” Mark Thrash. (left) Mark Thrash was born a slave in VA on Christmas Day 1820 and reportedly lived to 8 days before his 123rd birthday in 1943. His master’s family brought him to Chattanooga during the aftermath of the Battle of Chickamauga, and as a slave was required to bury the dead. He would drift back and forth in the custody of North and South throughout the war, and post-war moved to Arkansas. Thrash returned to Chickamauga in the 1890s and worked for the Southern Railroad and the Park Hotel in Chickamauga. He would eventually settle in a cabin in Chickamauga Park. Thrash became a park employee in 1894, helping to erect monuments and keeping grounds. His 28 years of service would earn him a government pension, and stayed in the cabin even after his retirement. Later in life, he became a popular park attraction as a story-teller, often receiving dozens of visitors a day. Thrash was married five times and had at least 29 children. He’s buried in District Hill Cemetery in Chickamauga. Mark Thrash received full military honors at his funeral. Gravestone Inscription – “Uncle Mark Thrash – Slave – Friend – Faithful Servant – Chickamauga Battlefield – Employee – 1893 – 1921” This photo features radio evangelist Rev. T Perry Brannon (right) of WDOD, presenting Mark Thrash (left) with a radio donated by the friends of the radio revival, in abt. 1940. 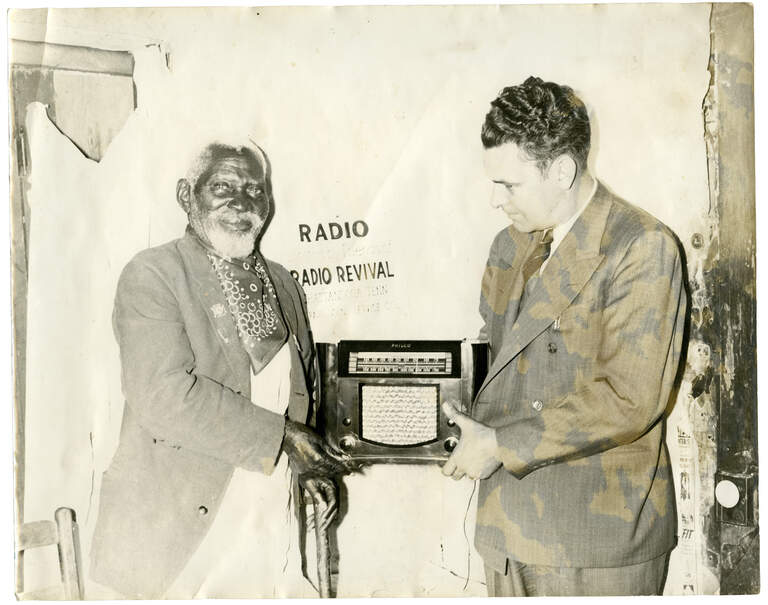