Archive
A trade card and a railroad distance table for the Read House. Located on Martin Luther King, Jr. Boulevard between Broad and Chestnut Street, Read House is an enduring landmark in downtown Chattanooga. Built on the former Crutchfield House site, Read House was established by Dr. John Thomas Read in 1872. The current building, which is listed on the National Register of Historic Places, was constructed in 1926 at 2.5 million dollars. Built in the Georgian style, the building was designed by the Chicago architectural firm of Holabird & Roche. In 1879, John Read passed ownership of Read House to his son, Samuel R. Read. He operated the hotel until 1943, when it was sold to Albert Noe, Jr., he passed to his son, Albert Noe III, upon his death in 1947. The Provident Accident and Life Insurance Company bought the property in the 1960s, at which time it underwent a renovation with the addition of a motor inn. Now, after several subsequent ownership changes, it is owned and operated by Avocet Hospitality Group. 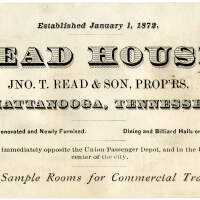